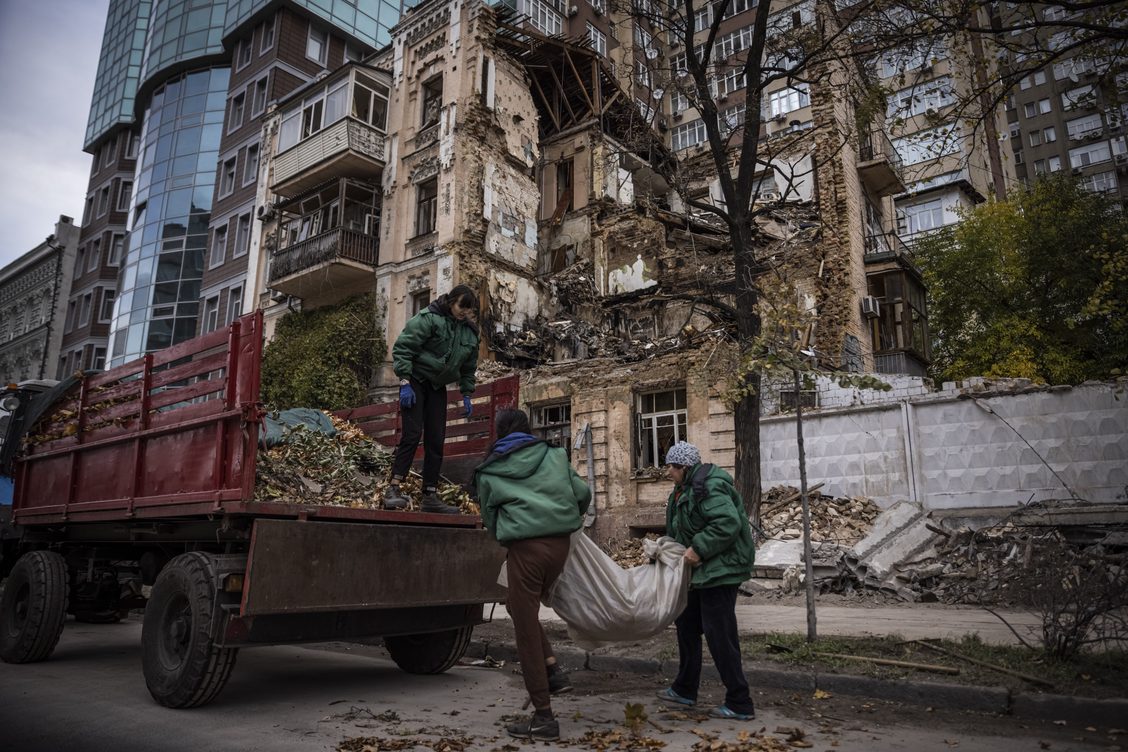 People clear blast debris and leaves outside a house where a couple was killed in a Russian drone strike two days beforehand on October 19, 2022 in Kyiv, Ukraine. Recent Russian attacks around Kyiv and across Ukraine have targeted power plants, killing civilians and employees of the key infrastructure. (Photo by Ed Ram/Getty Images)

Putin ‘imposes’ martial law in occupied areas of Ukraine to give proxies more power. Russian dictator Vladimir Putin signed a “decree” on Oct. 19 “imposing” martial law in occupied areas of Donetsk, Luhansk, Kherson, and Zaporizhzhia oblasts, following its sham “referendums” there. According to the Russian state-controlled news agency RIA Novosti, it will “come into effect” on Oct. 20. “Heads of regions will be given additional powers to ensure security,” said Putin.

Foreign Ministry: Martial law in occupied territories ‘imposed’ to suppress local resistance. In an official statement, the Foreign Ministry wrote that the goal of Russian dictator Vladimir Putin’s declaration of martial law in Ukraine’s Donetsk, Luhansk, Kherson and Zaporizhzhia oblasts was to “suppress the resistance of the residents (of these oblasts) who oppose the Russian occupation.

Russian proxies in Kherson plan to relocate or deport up to 60,000 city residents. Moscow-installed proxy in Kherson Oblast Vladimir Saldo on Oct. 19 announced an “organized displacement of the civilian population” from municipalities around Kherson to the territories “on the Dnipro River’s left bank.” He said that all Russian top proxies, including himself, will move too, but didn’t specify to where exactly.

ISW: Russia setting stage for false flag operation near Kherson. The Institute for the Study of War said in its latest update that Russian forces are setting information conditions to conduct a false-flag attack on the Kakhovka Hydroelectric Power Plant near Kherson. Russian authorities are alleging a planned Ukrainian strike on the plant, likely to “set conditions for Russian forces to damage the dam and then blame Ukraine while using the resulting floods to cover their own retreat further south into Kherson Oblast,” the ISW said.

Air Force: Ukraine downs 4 out 6 Russian cruise missiles, 10 kamikaze drones on Oct. 19. Russian Tu-95 and Tu-160 bombers launched six cruise missiles on Ukraine at 12 p.m. on Oct. 19, four of which were shot down in Kyiv, Vinnytsia and Chernihiv oblasts, according to Ukraine’s Air Force. Russia also attacked Ukraine with Iranian-made Shahed-136 kamikaze drones, from “the northern direction, in particular, from the territory of Belarus,” Air Force reported. Ten drones were shot down.

Zelensky doesn’t rule out potential failure of Ukraine’s electricity system. The Ukrainian leadership is preparing for “a number of different scenarios” of further serious damage to the energy infrastructure of Ukraine after over a week of Russian missile and drone strikes on electricity facilities across the country, according to a statement released by the President’s Office.

Electricity supply to be limited across Ukraine from Oct. 20. The supply of electricity will be greatly limited, with more regular blackouts a realistic scenario if consumption isn’t reduced accordingly, warned Kyrylo Tymoshenko, deputy head of the President’s Office.

Zelensky: 233 Iranian kamikaze drones shot down over Ukraine in past month. The number of Iranian Shahed-136 loitering munitions shot down, along with “tens of missiles” was named by President Volodymyr Zelensky during his regular address to Ukrainians.

Military advisor: Likelihood of new attack from Belarus low but could rise in spring. Russia is highly unlikely to be able to gather enough forces in Belarus for a renewed attack on Ukraine from Belarus territory, according to Yevhenii Sylkin, strategic communications advisor for Ukraine’s Joint Forces Command, as reported by Ukrinform.

Wagner Group founder claims that Russia creates defensive lines, ‘people’s militia’ in Belgorod Oblast. Wagner Group, the state-backed private military company that has played a key role in Russia’s invasion of Ukraine, is overseeing the fortification of Belgorod Oblast along its border with Ukraine, according to Yevgenii Prigozhin, the group’s founder and Russian President Vladimir Putin’s close ally. 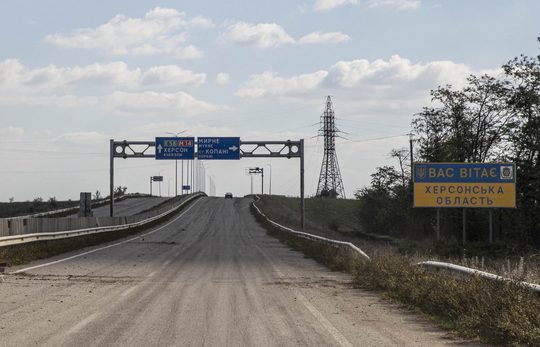 As Ukraine sets its sights on liberating Kherson, Russian proxies try to push people out. As Ukrainians push toward occupied Kherson, the Russian occupiers on Oct. 18 said they would move up to 60,000 Ukrainian civilians to occupied parts of Ukraine or Russia. 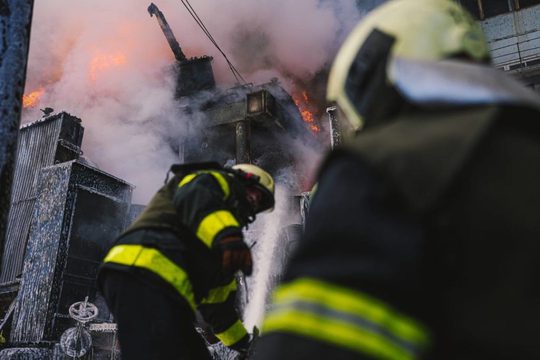 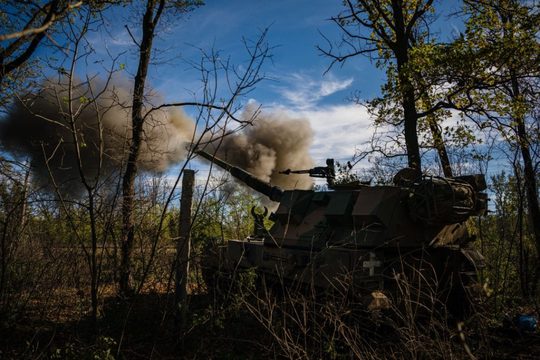 Ukraine war latest: Putin ‘imposes’ martial law in Ukraine’s occupied regions as his proxies flee Kherson. Russian President Vladimir Putin signed a “decree” on Oct. 19 to “impose” martial law in occupied territories of four Ukrainian regions that he had claimed as part of Russia in an illegal annexation attempt in September.

The human cost of Russia’s war

Three wounded in Russian drone attack on Chernihiv. Two of the three victims of the kamikaze drone attack on the city of Chernihiv on Oct. 19 are in intensive care, according to Kyrylo Tymoshenko, deputy head of the president’s office. No fatalities have been recorded, he said.

Lockheed Martin ready to boost HIMARS production to 96 units per year. The American defense industry giant has already taken steps to prepare to raise production of the High Mobility Artillery Rocket System from 60 to 96 per year, funding the fast-tracked production of some parts, the company’s CEO Jim Taiclet said during an earnings call, according to the Breaking Defense media outlet. The announcement comes amid increased international demand for the system following incredible success on the battlefield in the hands of the Ukrainian army.

US charges, sanctions Russians with shipping military equipment to Russia. The U.S. charged five Russian nationals with sanctions evasion and for shipping U.S.-made military technology to Russian customers, some of which has been used in Ukraine, Reuters reports.

Media: EU to introduce new sanctions on Iran for joining Russia’s war against Ukraine. The European Council will introduce a motion on sanctions on three high-ranking Iranian military officials as well as on Shahed Aviation Industries, manufacturers of the kamikaze drones of the same name, an unnamed European diplomat told Interfax Ukraine.

EU parliament awards Sakharov Prize to Ukrainian people. The winner of the prestigious human rights award, named in honor of Soviet scientist and dissident Andrei Sakharov, was announced by President of the European Parliament Roberta Metsola on Oct. 19. “They are standing up for what they believe in,” Metsola wrote on Twitter. “Fighting for our values. Protecting democracy, freedom & rule of law. Risking their lives for us.”

Need instant translation in your browser? Use the plug-in/extension ‘Translate Web Pages’ for either Firefox or Chromium browsers: